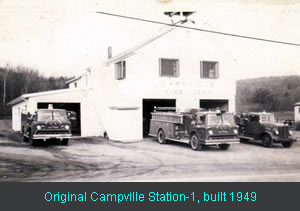 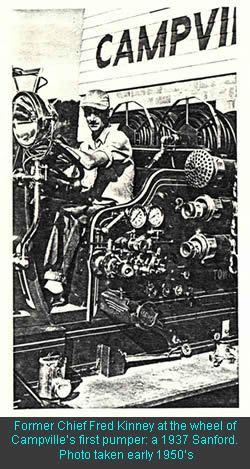 Campville is one of the oldest communities in the area. The earliest historical references to Campville date back to the year 1800 when Colonel Asa Camp crossed the Susquehanna River from Apalachin with his family and settled on a tract of farmland in what was then referred to as East Owego. Colonel Camp built and managed a tavern there that became a famous resort in the stage coaching period. This stopping off place became quite popular and other settlers soon built more homes in the vicinity.

By action of the Congress of 1835-37, a Post Office was established here with the official name of Campville, in honor of Colonel Camp. Community growth continued with the building of the Erie Railroad and a depot at Campville in 1849 and a stockyard five years later. A Gazetteer of about 1872 listed Campville as possessing a station on the Erie Railroad, a Methodist Church, a hotel, a store, a grist mill, a plaster mill, a blacksmith shop, a saw mill and about 20 homes. There may have been a fire department in the community at that time as well: historical records are not clear on that point.

The present Campville Fire Department is an outgrowth of the Campville Booster Club: a group of 33 community residents who held their first fire department planning meeting on April 30, 1947. By the spring of 1948, the Campville Fire Corporation had been formed and meetings were centered on finding a suitable location for a new fire station.

This was a community of modest means, so even though they received generous donations of $100 each from IBM and EJ, the majority of funding for the new department was raised by the community itself. By early 1949, a 100'x300' plot of land on Route 17C in Campville had been obtained. A basic design for a two bay station with an upstairs meeting hall was quickly developed and ground broken for it in March of 1949. The first meeting was held in the building on August 17, 1949. 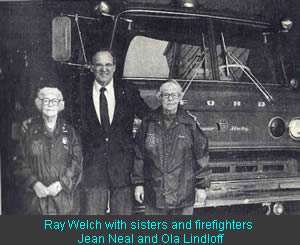 Equipment for the department in those early days was very limited. The Town provided a portable pump and 200 ft. of 1½ inch hose. In 1950, a 1933 chemical tank truck was provided by the Town, followed by a 1937 crank-start pumper. This gave the department a 300 gallon carrying load and a 500 GPM pumping capacity. Four years later, the chemical truck was stripped of its 'good parts' and those were added to a 1950 International chassis to become the first department tanker.

In those early days, it was difficult to get a rapid day time response for fire calls, so it was not uncommon to find women driving the trucks to the scene and fighting fires along with the men. Women have been full fledged members of the department since 1958, the first for Tioga County. Women make up nearly one third of the department’s fire fighting and emergency squad team today.

In the 1960's and 1970's the district experienced a rapid growth in population with many new homes in the rural areas plus the establishment of developments in Pine Knoll, Crestview Heights and Deming Heights. In 1975 land was purchased for a second station at Gaskill Corners to provide faster response in the northern region of the fire district. Ground was broken in September 1976 and the finished Station-2 became operational in January 1977.

The department began providing emergency squad service to the community with an American Legion Cadillac ambulance. That ambulance was purchased outright in 1972 and all emergency squad calls from that point on have been without charge. In 1976 the first modular ambulance was added to the department's inventory, providing more room for onboard equipment and better patient access during transport. Training and equipment now permits the department to operate at the Advanced Life Support level.

Bigger and more modern equipment was gradually added to the department over the years. These longer, wider, and higher vehicles soon made it obvious that the original station in Campville was not going to be adequate for the department's needs. Major revisions to the existing building were not feasible, so land was purchased in 1991 for a new station. Construction began the following spring and the new Campville Fire Station 1 became operational in August of 1992.

In 2016, the Town of Owego Fire District expanded by a contract revision adding an additional 13 square miles to the Campville Fire Department response district. Adding those 13 square miles, the Campville Fire Department is now responsible for 45 square miles in the Town of Owego making it one of the largest fire districts in Tioga County. With this expansion, we added an additional fire station on Route 38 near the Public Safety Building for better response times for fire and EMS personnel and to house more emergency vehicles. Station 3 is also responsible for helping not just our members, but members of surrounding departments with a unique training maze for firefighters to practice the various skills that we use for emergency incidents.

Today, the Campville Fire Department is one of the best equipped, best trained departments in the region. It serves the community from its three stations, with modular ambulances, high volume tankers and pumper-tankers, off-road vehicles, river rescue craft, and a rescue/command post vehicle. Looking back at the progress that has been made over the years makes us proud of just how far we have come and how grateful we are for all of the long hours of planning and hard work that so many of our volunteers have contributed to make the department what it is today.